How is clay formed? Is it inorganic or organic?

Clay is the product of chemical reaction between silicate rocks and water. Different types of clay and their different physical and chemical properties are determined by their individual chemical composition and structure. Two well-known clays are kaolin and “expansive clay”. Kaolin is used in numerous industrial applications, but it is best known for being the main component of china clay. Expansive clay is a group of minerals we refer to as “smectite” that expands through absorption of water within their structure. Smectite also has many industrial applications, but creates great problems in construction because it absorbs and releases water depending on environmental conditions.  This can result in ground movement with catastrophic effects on buildings.

So how do these very different types of clay form? Why does sometimes kaolin and sometimes smectite form, or indeed any of the many other clay minerals? Most research into this question has focused on inorganic factors including: composition of the original silicate rock, chemistry of the waters producing chemical attack of the rock, temperature, water pH, etc. Temperature can refer to the ambient atmospheric conditions, the temperature of rainwater attacking the rock, or to attack by waters from a specific source such as a hot spring. Today, the inorganic conditions producing the various types of clays are reasonably well understood.

One thing is missing, however: life. Living organisms, particularly microorganisms, have been around for most of the lifetime of the Earth. How important are they in the processes that generate clay? How much of the clay around us is like it is because life is “interfering” with it? Imagine, for example, that bacteria literally cover the surface of every rock or mineral grain on Earth, from the surface down to as much as 3 kilometres below the surface. Life forms are so different and their activity so complex that this information is very difficult to gather and systematize. We are only very slowly making headway.

Recent research by me and other collaborators has investigated the reaction of waters of very different chemistry and microbial populations on volcanic glass. Microbes thrived happily in the experiments as can be seen in the photo below: where the black sand shows volcanic glass and the whitish fluffy stuff are the microbial colonies. 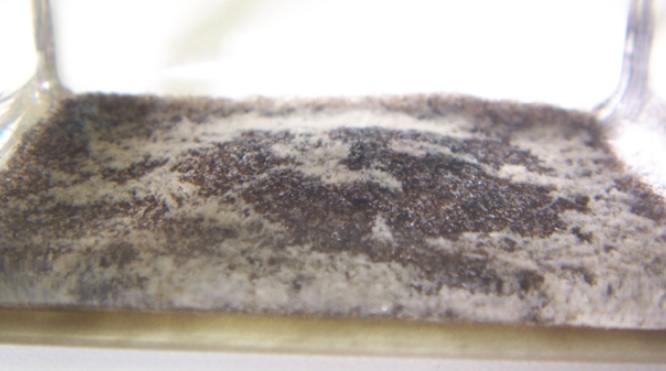 When looked at using an electron microscope, one could see how the microorganisms stuck to the glass grains, as in the pictures below, where you can see cells and biological tissue on glass (the very smooth surface on the picture at the left) and other mineral surfaces (polygonal shapes on the right-hand photo). Everything in these pictures is micro-metres in size (1 micro-metre is 1 millionth of a metre).

Was there some effect as a result of this contact? Well, not always, but at other times there was. The main effect observed was the microbes generating a “biofilm” eventually enclosing all the glass grains seen partly developed in the top colour image. At the end of the experiments, the entire mass of the glass grains formed a single body due to this entrapment by the microorganisms. In some cases, the chemical conditions within the biofilm were rather different from those in the water outside, and the clay that formed was also different from the clay formed in control experiments that had no microbes, only the glass and the water.

What sort of clay formed? This was mainly smectite, but with different chemical compositions, and some kaolin here and there. The specific composition of the smectite is very important to understand the life-cycle of rocks. The effect of having smectite with a lot of aluminium is very different from having smectite with a lot of magnesium. This is exactly the difference that the microorganisms made in the experiments. In nature, smectite clays of different composition are expected to come from different environments. But this experiment shows that microorganisms can create a different environment at a very small scale, next to the rock that is chemically attacked, and can effectively override the large-scale environmental conditions.

You will be happy to know that clays containing both aluminium and magnesium are good for modelling, although they do not behave exactly the same when fired.

Watch out for news in the coming months about clay as an indicator of life on Mars.