Dr Javier Cuadros, longtime Clayground colleague, is Clay Geochemistry Researcher at the Natural History Museum. In this article he explains how he and his colleague, Flavia Pinzari, observe for the first time a delicate and complex natural process.

A few kilometres north-west of Rome there is a natural park called Caldara di Manziana. The park’s main feature is an old volcanic caldera. Geologists call volcanic craters not elevated from their surroundings, ‘calderas’. They look like depressions in the ground. Manziana’s caldera produces gas emissions, mainly of CO2. The geyser in the picture below is produced by this gas rising to the surface. The water is pushed by the gas from an aquifer underground to form the pond. The emanating gas makes barren the central section of the caldera (see picture) because there is too much CO2 at ground level to allow plants to live. Rodents, foxes and even wild boars are sometimes found dead in this area. We humans are safe standing or walking because we are sufficiently tall to be above the CO2 layer lying below. 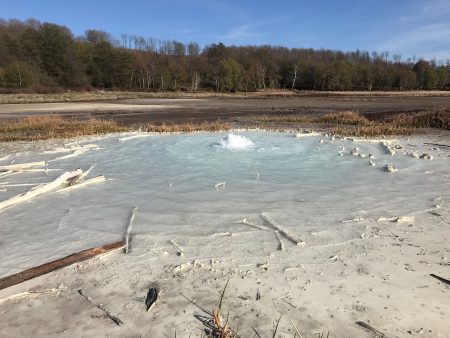 Pond at the centre of the caldera in Caldara di Manziana, with a CO2 geyser.

In the caldera there are also more diffuse emanations of H2S. This gas is famous because it produces the “rotten egg” smell. H2S becomes a weak acid when dissolved in water. However, it is at one extreme of a chain of chemical reactions that produce sulphuric acid, a very strong acid, capable of corroding and dissolving minerals. The reaction of rocks with sulphuric acid frequently produces clay, mainly kaolin. The soil around and under the pond in Caldara di Manziana suggests kaolin (see photos).

Gas vents around the pond of Caldara di Manziana. Some of them show bubbles as the gas vents through the water just below the surface. The white areas around some of the vents indicate that the vented gas is H2S (see text).

The story here is not about this kaolin, but about a related phenomenon that has been described for the first time by Javier and his colleague Flavia. Javier is a geologist and Flavia is a microbiologist, two facts essential to the story that follows. Strewn around in the soil, there are crystals of a dark mica called phlogopite, brought onto the surface with the volcanic activity in the caldera, which lasted for a few hundred thousand years and ended some 90,000 years ago. One can see the crystals by looking carefully at the ground. They are flat, thin and dark with a lustre. Attractive things to pick up and examine. And here comes the surprise. When holding them up to the light, most of these crystals show a multitude of pinpricks. A clearer view is provided with the use of a microscope, where one can see many perforations of different size and shape. 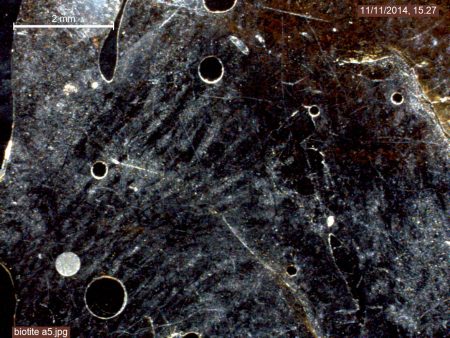 Holes in a crystal of mica from Caldara di Manziana seen through a microscope. The holes are rather small (see the scale bar). Some are not complete holes, but depressions that contain a whitish sediment.

The perforations are produced by sulphuric acid in a rather complicated process. The H2S dissolved in water can transform into sulphuric acid by purely chemical reactions, but it takes a long time. In Caldara di Manziana, in the soil and in the pond, there are bacteria that use sulphur as their energy source. Animals use oxygen as a source of energy, and they are said to respire oxygen. These bacteria are said to respire sulphur. They use the sulphur in the H2S dissolved in the water, even in water droplets from rain, condensation or splashes from the pond, and they transform it into sulphuric acid, which corrodes the minerals. The transformation is done in stages and by different species. Last come those bacteria that can live in the sulphuric acid. The particular effect on the mica is that the sulphuric acid in the water droplets corrodes and dissolves the area covered exactly by the droplets, leaving the rest intact. 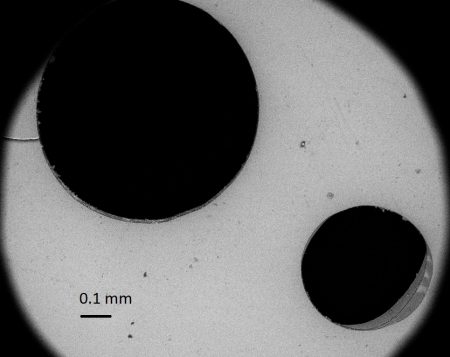 Small area of a mica crystal viewed with an electron microscope. There are two holes next to each other produced by two tiny sulphuric acid droplets. The mica structure consists of stacked layers, perpendicular to the view in this image. For this reason, the dissolution frequently produces flat terraces as those on the right-hand side hole.

What happens to the dissolved mica? Part of it becomes kaolin. In the caldera, the mica crystals are not the only minerals attacked. Many others have been attacked in a less interesting fashion and they have become kaolin and other minerals which are typical of acid attack on rocks. The white areas around some of the small gas vents (see picture above) indicate that H2S is vented there, is transformed into sulphuric acid by the bacteria and then the acid corrodes the minerals around, producing the whitish colour. This is an example of how geology and biology come together and interact, producing modifications to the environment that are quite unexpected, and that can be of large scale. As a matter of fact, some minerals produced in the acid attack are currently or have been mined in the area. We think of sulphuric acid as a man-made substance used for industrial processes. Yet, here is an example of sulphuric acid produced by purely natural processes.

The holes in the mica are only incidental in the entire process taking place in Caldara di Manziana but of great interest because they are such a curiosity and because they require a combination of multiple factors: geological, biological and climatic. No other mineral can dissolve in the fashion this phlogopite mica does. Other minerals retain only inconspicuous marks of the acid attack. The H2S gas is essential to start the production of sulphuric acid. The bacteria are necessary to produce the acid in a short timescale allowing effective corrosion. Finally, the water droplets provide the necessary environment in which all the above happens and they leave their clear-cut outline on the mica.