“Saharan dust can travel long distances in different directions across the Atlantic and Europe, sometimes in episodes of high dust concentration. These dust events can have beneficial effects, such as soil and ocean fertilization, because they provide mineral nutrients that tend to get depleted in the sea and soil. But they can also have negative health effects for humans. In recent years one of my colleagues, Jose Luis, working in Granada, Spain, found that on certain occasions part of the dust aggregates into very large spheres like the ones in this picture.

Large aggregates of Saharan dust. The spheres are between 0.05 and 0.1 mm of diameter.

This was an entirely new phenomenon, so Jose Luis worked hard to try to understand how these very large particles (the large sphere in the bottom left corner is almost 0.1 mm across) came to be. The issue is that the dust was known to come from the Sahara, but these large particles could not travel the distance to Granada. So how were they formed? The process is complex and starts in clouds in the stratosphere. In a simplified way, we can say that these aggregates form inside raindrops. Some of the dust grains are probably the seed for the raindrops. Then, other mineral dust is captured as the raindrop moves in the cloud and grows until it starts its descent. When the raindrops fall, in certain atmospheric conditions, the water evaporates and in this process shapes the mineral particles inside into a sphere. By the time the particles get to the ground they are entirely dry and they preserve their shape.

What is in these aggregates? More or less, everything that is in the dust. The reddish colour of the particles above are the typical colour of the Saharan dust clouds that can be seen in satellite images, like the one shown here. 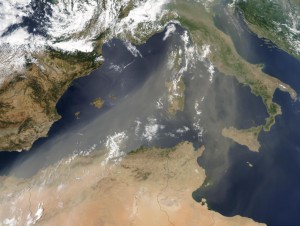 Together with other colleagues from Spain, Jose Luis, Antonio, and one more Antonio, we investigated the mineral particles in the aggregates. Clay is very prominent. In the picture below, the yellow and pink particles are clay. 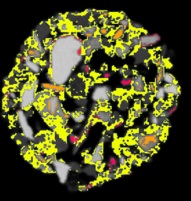 Artificially coloured section of a dust aggregate indicating the type of mineral grains that make it up.

This image was obtained sectioning one of the aggregates, doing chemical analysis of the particles inside and colouring them artificially according to their chemical composition. It is apparent that the very little particles of clay place themselves in between other bigger particles, while they are still within the water droplet. When the raindrop dries out, the clay provides the cohesive forces to keep the sphere together, very much like in a piece of pottery. We may think of pottery as man’s invention or an exclusive human activity, but actually it is not. Interestingly, the first aggregates of these type discovered by Jose Luis had by chance fallen into a forest fire so that some of them probably underwent the whole process of pottery making.

These aerosol aggregates are a unique phenomenon resulting from very specific atmospheric conditions and they are not common at all. They have been termed “iberulites” due to their discovery from aerosol deposits in the Iberian Peninsula (https://en.wikipedia.org/wiki/Iberulite; https://www.youtube.com/watch?v=ZGrrz7bjcD0). They teach us something new about clay properties and remind us that art is indeed an imitation of nature.”