Javier Cuadros, Clay Geochemistry Researcher and Clayground adviser, explains one method of discovering the geology of other planets.

Colour is a tricky thing. Take a piece of iron with no rust. It has a familiar colourless, shiny appearance. Now rub it hard with a file and look at the filings. They are black. The filings are exactly the same substance as the large piece. Why then do they have a different colour? The colour change is produced by the different way light interacts with the large, smooth piece and the small pieces with very rough surfaces.

The same phenomena occur with clay. The colour of clay may be caused by many factors, from the chemical composition to the physical arrangement of the clay particles. This colour, however, is the “visual colour”, the colour that our eye perceives. There are other ways to detect colour which are not modified by such a multitude of variables. Colour can be detected as light radiation, rather than the impression that the radiation produces on our retina and brain. Using the measurement of light radiation (what we call light spectrum) allows the mathematical processing of this measurement and a much more objective and detailed investigation of the origin of colour.

One of the easiest and best ways of planetary exploration is to take pictures of the planet’s surface. Telescopes in satellites orbiting Mars can see objects a few centimetres across. There is no other type of instrument that can achieve such resolution. Planetary scientists, however, want not only to see geological features on the surface of Mars, they also want to tell what the rocks are made of. Use of light and colour would be ideal to identify the composition of rocks on Mars.

This is what Javier and colleagues are doing. Using a colourful collection of clays from ocean ridges (see below) they took the light spectrum of each one and processed them mathematically. The main feature in the spectra corresponded to iron in the clay. They found that they could confidently predict the amount of iron in the clay from their study of each corresponding spectrum.

Examples of clay formed in hydrothermal sites at ocean ridges.

Iron is abundant on Mars and is part of the many minerals that can be found there. The red colour of the planet is precisely produced by fine iron oxide dust. Detecting the amount of iron in any mineral on the Martian surface is important information. The study of Javier and colleagues was carried out with clay, one of the most interesting rocks on Mars because of its direct relation to water processes. Their study is aiming to allow scientists to process photographs of clay deposits on Mars and be able to tell how much iron is in those clays. Will it be possible? Some issues have to be ironed out yet and testing is going on, but the initial results are encouraging.

Below is a 3-D processed photograph from Mars, taken from a satellite, showing the wall of a crater with layers of different clays. The colour difference is obvious, and the light spectra have characteristics that are consistent with the results of Javier and colleagues. The composition of these clays is known to us through the use of other techniques, which require more convoluted and time-consuming work than the study of the colour from a photograph. These other methods will not be superseded by the use of colour because it is always useful to have “a second opinion”. Testing rocks with different techniques is important, in order to double-check that results are correct. The more of these techniques that are available and the faster and easier they can be used and processed, the wider the possibilities of planetary exploration. After all, there are only a few pieces of machinery orbiting around or roving the surface of Mars, each one of them extremely costly. We want to use their capabilities to the utmost. 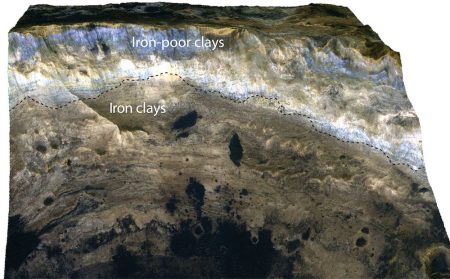