Latest finds on the Thames Foreshore 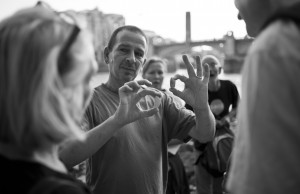 Clayground’s current project, Clay Cargo 2014: London to Stoke via Birmingham, renews links between ceramics and the waterways today.  Archaeologist, Mike Webber, calls on his encyclopaedic knowledge of London and the river to illuminate the city’s trading history through ceramic fragments turned up by the tide.  Amongst the spectacular finds during our walk on September 27th there was a significant piece from the rim of a Roman mortarium and a piece of medieval jug handle. 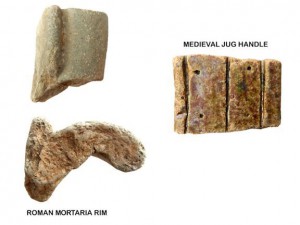 Secondly, a curious pipe-bowl exquisitely modelled.  After extensive research, we discovered on the site of the Archaeology Group that this is likely to be a rare caricature pipe dated around 1880-1900, known as a ‘Yankee Doodle’.  A fuller explanation by the Archaeology Group is given below. 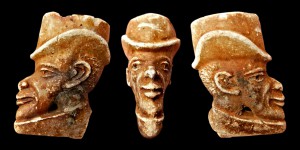 “Comparable to the later image of Uncle Sam, the Yankee Doodle image represents the American nation, and was based on the song widely used in the American War of Independence. The song had a continued popularity during the 19th century, encouraged by the publication of American music. The figure wears a style of hat that is an attribute of the ‘Uncle Sam’ but the face appears to be based on the distinctive long features of Andrew Jackson, president of the United States 1829-37. Jackson was a national hero after his victory over the British at the battle of New Orleans in 1812. In his later career he fought to preserve the Union.”

We’re not convinced about his similarity to Andrew Jackson, but it certainly looks like a ‘Yankee Doodle’ pipe.

Don’t forget you can find a visual aid to help you date your fragments on a post here.