Clayground adviser, mineralogy researcher Javier Cuadros, gives us the latest news of his research into clays on Mars, the background arguments to where the Curiosity rover has landed and where it is searching for evidence of life.

Liquid water was relatively abundant on Mars in the early stages of its history, as shown by numerous ancient clay outcrops. This suggests the possibility of life. The Curiosity rover is investigating habitability, which means investigating rocks where life could have existed or may exist even now. Curiosity moves very slowly on the Martian surface and can only cover a small area, so it will take time for it to hit on evidence of life if it is there or ever was.  It may never succeed in doing so.

In the meantime, we have an enormous dataset collected by the several satellites orbiting Mars and used this to investigate whether it might be possible to search underground for remains of life. First of all, we argued, life on Mars is as much or more probably to be found underground than on the surface. Why?

Here on Earth, the amount of biomass underground is the same as that on the surface. Think of it: there is a living world underground as big as the one you see on the surface of the continents and in the oceans, made up exclusively of microorganisms. We also know that some of these microorganisms are among the oldest forms of life on Earth. So it is possible that life on Mars could have also developed underground. And there is good reason: conditions at the surface have been very harsh. Mars has been very cold, dry and bombarded by high-speed particles from the Sun for a long period of time. Life on the surface in these conditions is impossible. Underground however, microorganisms may have found a protected environment.

We used satellite data to investigate deep impact craters that may have excavated rocks inhabited by microorganisms. One of the craters we found has features suggesting groundwater upwelling. That is, a meteorite impacted Mars excavating a huge crater and then underground water seeped into the crater, half way from its walls, as seen in the satellite photographs. The crater also contains clays and carbonates, indicating the water seeping out had the right type of chemistry to support life. We proposed that this and similar craters, although not abundant, are good candidates for future Mars expeditions focusing on habitability. There, the rovers could investigate sediments derived from underground waters. Because the sediments are clay-rich, they are good preservers of remains of life. Clay does not only provide an environment suitable for life to develop but also preserves dead organisms from complete degradation and disappearance. 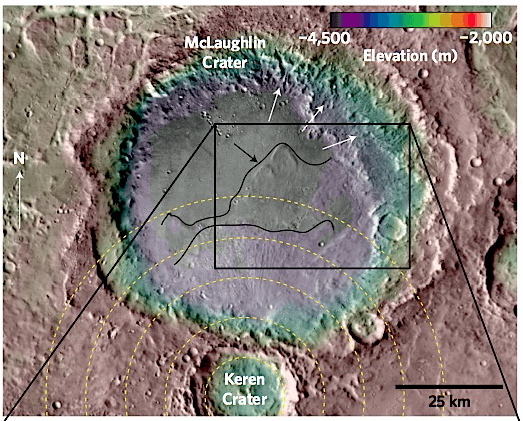 McLaughlin crater on Mars. The arrows indicate possible channels generated by seeping water. The black lines show lobes interpreted as sediment deposited by the waters seeping into the crater and forming a lake. Keren Crater, below, formed later by another impact.

For anyone wishing further information, see the article by Joe Michalski, Javier Cuadros and colleagues published in Nature Geoscience: ‘Groundwater activity on Mars and implications for a deep biosphere.’ Nature Geoscience 6, 133-138. doi 10.1038/ngeo1706.