Terry Noel is Clayground’s champion bearer of clay to London, bringing clay from wherever he and his steel orchestra play around the world including Azerbaijan, Austria, Norway, Trinidad and Turkey.  Terry leads the Melodians, a steel orchestra equally dedicated to playing for community groups in Wandsworth as it is for British Consulates from Baku to Vienna.  The Melodians’ latest international appearance is part of artist Jeremy Deller’s British Pavilion at the Venice Biennale.  The Melodians recorded interpretations of  Vaughan Williams’ Symphony in D Minor, UK acid house track ‘Voodoo Ray’ by A Guy Called Gerald and David Bowie’s ‘The Man Who Sold The World’ as soundtrack to Deller’s ‘English Magic’, a fierce critique and celebration of contemporary Britain. 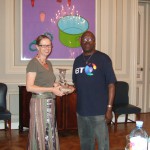 Here is Terry being presented with Austrian clay by Embassy staff member, Sian Stickings, collecting clay in Arima, Trinidad, with his colleague, Cristo Adonis; and moving those big pans around for rehearsal in Wandsworth. 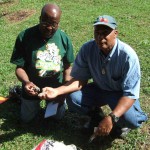 Congratulations to Terry and the Melodians.  Clayground is proud of our association with you.