Clay Mineralogy Researcher, Javier Cuadros, has kindly contributed an update for Clayground readers about recent developments in research into clay on Mars.

The Noachian period on Mars, more than 3,700 million years ago, was the time when water was most abundant in the red planet. How abundant, we do not know exactly. Precisely because water was present on the Martian surface and subsurface, this is the period when most clay mineral deposits were formed on Mars. Clays can tell us much about the environments where they formed. If we know the specific clay minerals (for example, kaolinite, talc, montmorillonite, etc.) in any deposit and we can ascertain that they formed there, rather than being transported from somewhere else, then we can use this information with other geological data to infer what that place was like at the time of clay formation. This can be done on Earth and also on Mars.

There has been geological evidence that a large sea (3 times the size of the Caspian Sea on Earth) existed 3,800 million years ago in the Eriadania basin on Mars. Now, a team including me has investigated deposits of clay and other minerals in the basin where the sea was located, using remote sensing data from satellites. They found that the deepest parts of the basin have a surface criss-crossed by abundant lines suggesting volcanic activity similar to ocean ridges found on Earth. The clays there are also iron- and magnesium-rich, just like those occurring in ocean ridges. A few years ago my colleagues and I studied these types of clays and reported on them to Clayground Collective. Our precise motivation was to investigate clays on Earth with the same mineral and chemical composition as those on Mars, in order to gain information about possible environments where the Martian clays could have formed.

On the edges of the Eridania basin where the sea-coast was, as indicated by numerous channels generated by water that come to end in these areas, there are deposits of salts. This is precisely what can be expected in a sea with very high salt concentration, as no doubt characterised the Eridanian sea, and in which there are sea level changes. Playas and lagoons would have preserved water ponds which created the salt deposits after evaporation.

This story tells us that environmental conditions can be reproduced in different planets with the consequence that the same processes take place, generating the same rocks. When my colleagues and I started studying iron- and magnesium-rich clays from submarine ridges years ago we did not imply that we would find environments on Mars identical to those from which our clays came. This is because relatively different environments can also produce similar rocks. However, our work has gone beyond our expectations and has produced evidence that some of the iron- and magnesium- rich clays on Mars come from a submarine environment. 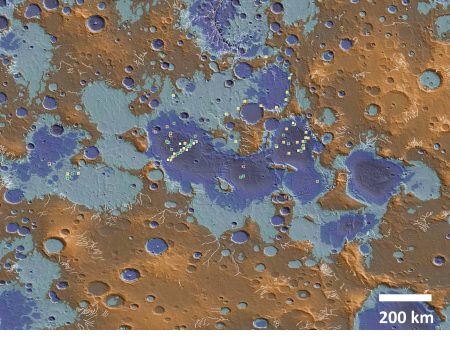 Image of the Eridania basin on Mars showing in blue the areas that were covered with water. Lighter to darker blue indicates shallower to deeper water. Also in the picture are numerous water channels, many of which end at the coastline. The coloured squares show the position where clays and salts are found.