From clay to your plate and back, Javier Cuadros

Clay Mineralogy Researcher, Javier Cuadros, has kindly contributed an article for Clayground readers with an update of fascinating directions in research into the ultimate destination of clay and its component chemicals.  This includes a glimpse of the complex interrelationship between fungi and minerals.

“Living organisms need metal nutrients, such as iron, magnesium or potassium to survive and flourish. Where do they come from, and how? Such questions have to be answered to understand how living organisms and minerals interact. The final goal is to create a model used to calculate where chemical elements go, how long it takes for them to get there, what route they follow, what are the actors taking them to each place, etc. It is like having a film portraying the global movements of elements and chemical compounds. For example, how does a C atom in a CO2 molecule in the atmosphere end up as part of a carbonate shell in the bottom of the ocean? And how, from there does it become a piece of marble in a museum? And how does it get back again to the atmosphere, and from there into a tree? How long did it spend in each one of those environments? One may think that these answers are impossible to find, but it is surprising how many of them we already know. As one can imagine, however, there are still dark areas in these global epics.

We know that fungi are very active agents in the extraction of mineral nutrients from soil and rocks, transporting them to plants and making them available for other organisms. We also know about the many mechanisms the fungi use to attack the surface of minerals and release the metal nutrients. We know that, in many instances, this attack results in clay. But when looking at minerals in soils we cannot recognize which fungal species did what.

For the first time in laboratory experiments, it has been possible to distinguish the fingerprint of three different fungi acting on the same mineral, a type of mica. This mica is basically like clay but the crystals are a few centimeters in size, much larger than we are used to seeing in clay. Using cultures of the fungi and an electron microscope, Flavia, an Italian microbiologist, and I investigated the mica weathered by the three fungi. The process appears chaotic at first. It is only by applying powerful statistical tests that it emerges attacks of the three fungi are different and produce remains of the mica, including clay, each with a different chemical composition.

This opens the future possibility of recognizing soil fungal species acting in the present or the past through their effects on soil minerals. This process would be a tool for investigating microbial ecosystems, living or fossil. Imagine one could pick up a fossil soil and by studying the clay reveal the composition of the microbial ecosystem, now totally disappeared, that generated that clay some million years ago.

The same studies tell us how the minerals are weathered and where their chemical elements go: into clay, into the groundwater or the fungus itself. And so we keep filling in the dark or fuzzy parts of the Earth’s global processes. Perhaps some of the elements leached by a fungus are now in a ceramic pot on a shelf in your home, or in the plant it contains.” 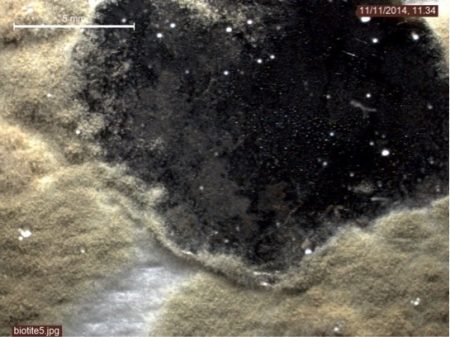 Picture taken with a stereoscopic microscope showing one of the fungi (white-yellow mass) colonizing a mica flake (black). 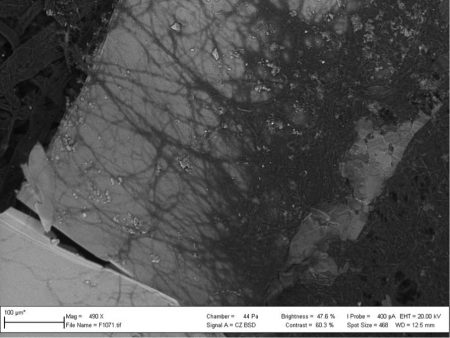 Image taken with an electron microscope showing a mica flake (light contrast) surrounded by the fungus (dark filamentous mass). On the right there is a mica flake almost entirely dissolved. Debris on the larger mica flake shows remains of other parts of the mica.

This is a blog post from Clayground.  If you only wish to receive our occasional newsletter, rather than the more regular blog posts, please let us know and we can remove you from the blog list.