Javier Cuadros, Clay Geochemistry Researcher, and colleagues have captured on film the moment that clay is formed.

Clay takes time to be generated from silicate rock, from thousands to millions of years. As water from rain, river, sea or underground slowly dissolves the rock, atoms go into solution to interact with each other and arrange themselves into a different structure that grows to form the small clay particles that give clay the properties of plasticity that we know. The process of crystallization of the clay can take place on the very surface of the rock that is dissolving or it can take place miles away. The shape and arrangement of the clay flakes can also be extremely varied. One example appears in the first picture below, where clay flakes forming rosettes can be seen, some of them growing on other minerals with a block-like appearance.

In most cases, the attack of water on the silicate rocks generates clays on the spot, even if dissolved atoms are transported by the water some centimetres or metres before they reach the place where clay crystallization begins. The crystallization happens in a specific place for a number of reasons, for example because water gets confined in cracks or pores and cannot move farther, or because it starts to evaporate. No matter how formation of clay happens and how slow it is, if we sample the rock or soil where clay is forming, we find both the original rock or minerals and the clay that has crystallized. The process of crystallization has some steps as the atoms find their way to the appropriate place, but it is so fast in comparison with the rock dissolution that one can hardly ever catch the intermediate step of “atoms not yet in the right place”.

The news is that Javier and his colleagues have done exactly this. While investigating soils from the Falklands they came across the “missing link” between rock and clay. The soil that they studied is produced by the disaggregation of sandstone. Javier and colleagues found in the soil the minerals typical of sandstone, such as quartz and feldspar, embedded in a mass of very small grains. The second picture below shows what these little grains look like. Unexpectedly however, there was no clay in the soil. What were the numerous small particles then? Two clues were found. The first is that they have a chemical composition like clay. The second is that they are not crystalline; in other words, the atoms in the particles are arranged in disorderly fashion. Atoms in clay are arranged in an orderly manner, forming rows and planes of atoms that are repeated at fixed distances. In the small particles shown in the picture, the atoms are arranged with no order.

The two clues indicate that the small particles are the stage previous to the formation of clay, where the process stopped because something went wrong. Most probably, water went missing at this crucial stage. Water is necessary for all steps of clay formation, as it allows atoms to move around. The Falklands is a windy place and less wet than one might think. Wind causes fast evaporation of water in soils. The scenario that Javier and his colleagues picture is that rainwater in the soil slowly dissolves the grains of sandstone but then the wind makes the water evaporate so fast that the dissolved atoms do not have the time to arrange themselves properly and hence “freeze” at the stage where atoms are still finding their right place in the particles. When more time elapses or water is allowed to remain longer in the soil (because the climate in the Falklands changes) the small particles will complete their transformation into clay.

The importance of this discovery is that the process of clay formation has been caught as if in slow motion. Something that most frequently happens too quickly to be observed takes place slowly in the Falklands soil, and this gives scientists a chance to “see” how it happens. In the Falklands soil there are 70 grams of the small particles in each kilogram of soil. So this clay-in-the-making may be abundant in arid zones of the Earth such as hot deserts and Antarctica, offering plenty of opportunities to research it. 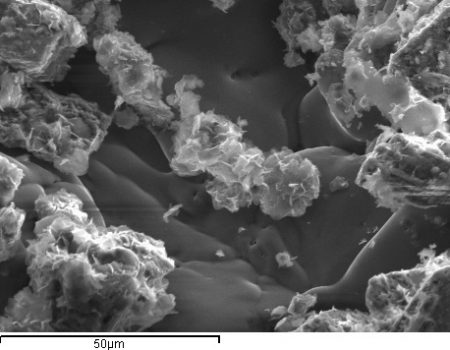 Image 1: Clay – Electron microscope image of clay flakes forming rosettes. Scale bar is 50 µm or 50 millionths of a metre. This clay formed in a submarine setting. 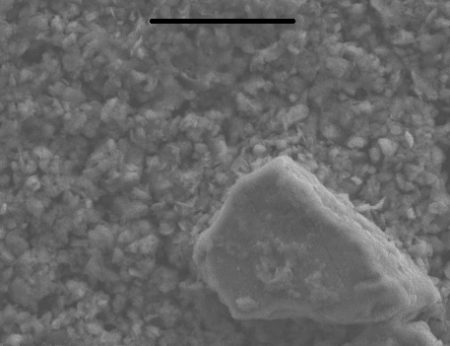 Image 2: Gels – Electron microscope image of the soil from the Falklands. The big particle is a grain of feldspar from sandstone. The small particles are the grains without atomic order. Scale bar is 10 µm or 10 millionths of a metre.